Explosions in the Sky triumphant in Camden! 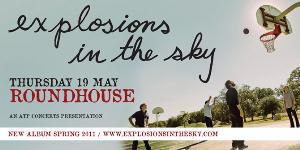 I was in London on Thursday which included a visit to London Zoo in the afternoon. In the evening I made my way to London Roundhouse, Camden for the Explosions in the Sky gig with support from Lichens.

Lichens is Robert Lowe who plays progressive electronic rock that droned out across the Roundhouse which was more like an art statement then a three minute hit single.

As soon as the clock hit nine o'clock Explosions in the Sky started their set which comprised of Last Known Surroundings, Yasmin The Light, Postcard From 1952, Catastrophe And The Cure, The Only Moment We Were Alone, Your Hand In Mine, The Birth And Death Of The Day, Let Me Back In and Greet Death.

The Post Rock brilliance of the Texan band filled the venue with a massive noise that let us all in and made us want it to go on forever, well at least until the last train home. Loud and beautiful while being quiet and harsh, Explosions in the Sky can be all these things without any lyrics. The gig finished without an encore after an hour and twenty minutes of awesome music.

I first saw the band at Norwich Arts Centre seven years ago. The venues may have got bigger but the sound remains the same. Another triumphant night for Explosions in the Sky.
Posted by Andy Yourglivch at 06:13