The glory of the Norwich Singers! 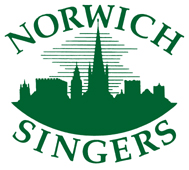 The Norwich Singers were formed in 1954 and rehearse at St. Anne's Church on Colman Road, Norwich. Their programme for this performance was Magnificat - Buxtehude, Requiem - Durufle and Mass in D minor (Nelson Mass) - Haydn. We were also treated to organ solos of Sinfonia from Cantata 29 - Bach arr Dupre and Variations on Amazing Grace - Dedard from Jim Laird.

The manuscript for Magnificat did not originally bear the name of any composer. At a later date Buxtehude's name was added. My soul doth magnify the Lord and my spirit hath rejoiced in God my Saviour.

Jim Laird's organ solos were very entertaining especially the variations on Amazing Grace. We all applauded loudly with smiles on our faces. It was then on to Maurice Durufle's Requiem which incorporates Gregorian chant. May the chorus of angels receive you and with Lazarus once poor may you have eternal rest.

After an interval apple juice I was looking forward to Haydn's Nelson Mass. This work was first performed in 1798. When Nelson and Lady Hamilton passed through Austria in 1800 several concerts were arranged in their honour. The works performed included the Nelson Mass and soon afterwards the Mass became known under its present title.

The choir and the soloists all showed great enthusiasm and put on a brilliant performance. Blessed is he that cometh in the name of the Lord. Hosanna in the highest. Overall this was a very enjoyable night at a historic venue with a splendid orchestra and choir with wonderful soloists.
Posted by Andy Yourglivch at 08:12