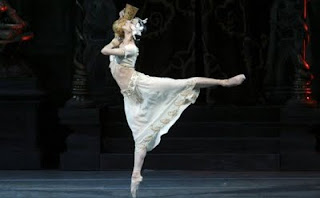 The most famous scene for the Ballet is The Kingdom of Shades where 32 ballerinas are on stage all moving at the same time in perfect harmony. This was done perfectly by the Mariinsky Ballet and will be my lasting memory of their performance. This was a wonderful afternoon spent at the Royal Opera House as the Mariinsky showed why they are one of the world's best ballet companies.
Posted by Andy Yourglivch at 09:50