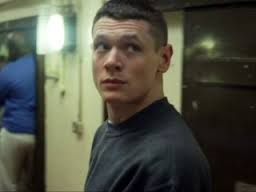 19 year-old Eric Love is a violent and troubled teenager making the difficult transition from a young offenders' institute to an adult prison. He seems to be destined for a life behind bars, but the prison's unconventional therapist is determined to help Eric find a way through, assisted by of one of the prison's longest serving inmates, Neville who just happens to be Eric's father. Starred Up is a very gritty movie and will instantly become a cult classic.
Posted by Andy Yourglivch at 08:14