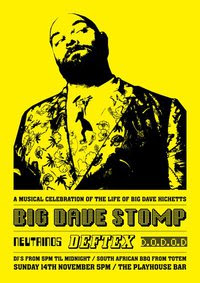 On Sunday night there was a musical celebration of the life of Big Dave Hicketts. Everyone was invited to raise a glass, bump fists, dance, smile, wear a golden suit and bring an owl. A musical celebration that was no way going to filling the gargantuan hole left in the world by his absence, but was, at least, going to be loud. It definitely was loud!

African food was provided by Totem. I enjoyed a plate of Zimbabwean curried bean stew before the bands took to the stage. The first band to play was Death Of Death Of Discotheque who once again put on another great show. It was like we had been transported to the height of New York No Wave being mixed with The Fall. Dirty, distorted and brilliant!

It was then the turn of The Neutrinos to entertain us in an Art Punk kind of way. it was another energetic set from Karen Reilly and the band on this emotional night. There were great performances of Eat My Hole and Mother's Mother Tongue.

It was then left to Def Tex to finish the day off with a bang and what a show they put on. it was a classic hip hop show from the Norwich veterans. They had the crowd eating out of their hands, it was like everyone and everything at the Norwich Playhouse Bar was bouncing up and down. Their performance was a fitting tribute to Big Dave Hicketts.

At the end of the night a blue plague was unveiled in the bar for Big Dave and several lanterns were let off into the night sky. I'm sure Big Dave would have approved.
Posted by Andy Yourglivch at 10:40