A fantastic journey to the Age of the Fifth Sun! 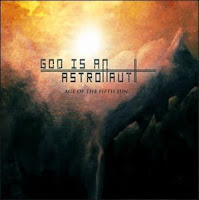 It was another night of awesome music at Norwich Arts Centre on Saturday night when the mighty God Is An Astronaut and New England band Caspian entertained us with their Post Rock brilliance.

First on stage were Caspian from Beverly, Massachusetts who started their set with a quite introduction but it was soon clear that they were going to make a lot of noise. It was like their towering wall of sound was running through my veins.Their music is like electricity. At the end of their set all the members of the bands were on drums making a beat that probably could be heard all across Norwich!

It was then time for lift off to a fantastic journey with God Is An Astronaut to the Age of the Fifth Sun and beyond. The band from Co. Wicklow, Ireland delivered everything I expected from them. Magnificent Instrumental Rock to make your ears bleed. It was like when you got into the beat of the music you were transported to an amazing alternative Universe. Calling the night epic is an understatement!

If you are into Post Rock check out God Is An Astronaut and Caspian. You will not be disappointed!
Posted by Andy Yourglivch at 09:49