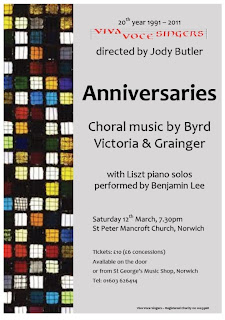 Tonight the Viva Voce Singers provided a pleasant evening of choral music by Bryd, Victoria and Grainger with Liszt piano solos at St Peter Mancroft Church, Norwich. The evening was entitled Anniversaries as part of their 20th anniversary.

The evening started with a delightful performance from the choir of Byrd's Mass for Four Voices then more delights with Victoria's wonderful Latin church music including Ave Maria.

After the interval when I was served with a delicious glass of apple juice the choir sang Mary Thompson and The Gipsy's Wedding Day both Grainger English folk songs as well as Dalvisa a Swedish folk melody arranged by Grainger.

We were then taken into another direction by Benjamin Lee with a Liszt piano solo of Consolations S. 172 that was warmly received by the audience. The evening was completed with O mistress mine by Thomas Morley which Grainger gave a simple five part treatment. Brigg Fair which Grainger collected from a woodman, Joseph Taylor and finally Country Gardens which was Grainger's big hit.

This was a wonderful evening of music from the Viva Voce Singers that I'm sure everyone in attendance very much enjoyed.
Posted by Andy Yourglivch at 14:49