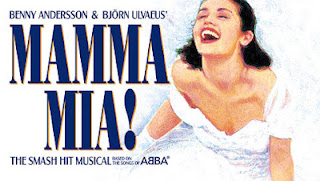 On the morning of Saturday 22nd September 2012 I caught the train to London via Witham looking forward to being transported to a Greek Island in the West End that afternoon. I was on my way to see Mamma Mia! the smash hit musical based on the songs of Abba at the Novello Theatre.

Mamma Mia! tells the story of a young woman on a quest to find her real father. Sophie Sheridan is about to be married and desperately wants her father to give her away. Since her mother refuses to talk about the past, Sophie reads her mother’s diary and finds the contact information of three men that she had intimate encounters with. She invites each of the men to her wedding and they all come. Eventually, however, it is clear that Sophie’s paternity is undetermined. But everyone involved agrees that they want to be a part of Sophie’s life.

Every Abba song sounds magical so this was always going to be a wonderful experience in the West End. Judy Craymer has created a story with strong female characters that gives a big feel good factor. She asked Bjorn Ulvaeus and Benny Andersson to take a chance on me and we are all glad they did. Chiquitita, Dancing Queen, Knowing Me, Knowing You and Money, Money, Money are all brilliant songs from Act One. In Act Two there's S.O.S., Super Trouper, Thank You For The Music and The Winner Takes It All bringing us more Abba magic. In total 22 Abba songs are performed during the show giving the audience a tremendously enjoyable time.
Posted by Andy Yourglivch at 16:50