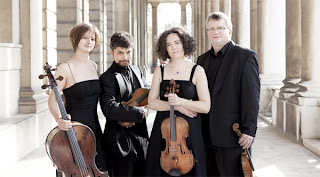 Founded in 1953 by Eli Goren, William Pleeth, Patrick Ireland and James Barton, the Allegri Quartet is Britain's longest-running chamber music ensemble, sustained over six decades by successive generations of the finest international performers. The current members of Ofer Falk, Rafael Todes, Dorothea Vogel and Vanessa Lucas-Smith are committed to maintaining the group’s exceptional reputation and dedicate a great deal of time to teaching young performers and composers through various residency schemes which are supported by the Radcliffe Trust. They are the UEA's professional Ensemble in Residence.

Beethoven's F minor String Quartet dates from 1810 and is his last before his exalted late string quartets. It is commonly referred to as the Serioso, stemming from his title Quartetto Serioso at the beginning and the tempo designation for the third movement. It is one of the shortest and most compact of all the Beethoven quartets. This is music full of restless urgency which ends with a racing allegro full of lightness and delicacy.

Shostakovich’s String Quartet No 11 was written in 1966 and was dedicated to the memory of Vasily Petrovich Shirinsky, the second violinist of the Beethoven Quartet who had died the year before. In the latter half of Shostakovich's career his music grew more private and introspective for which the string quartet offered an ideal medium.

Beethoven’s String Quartet Op. 131 was completed in July 1826 as part of a group of five string quartets which he wrote in the last years of his life. This work, which is dedicated to Baron Joseph von Stutterheim, was Beethoven's favourite from the late quartets. He is quoted as remarking to a friend that he would find a new manner of part-writing and, thank God, less lack of imagination than before. The piece is in seven movements played without without a break.

The Allegri Quartet put on a wonderful performance at the UEA School of Music which thrilled a packed Strode Concert Room. I particularly enjoyed Shostakovich’s String Quartet No 11 which is an astonishing piece of music. It has been created by someone who has seen and suffered much and is concerned only with essentials.
Posted by Andy Yourglivch at 09:43