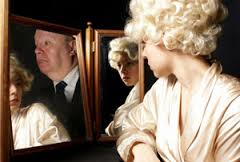 Hitchcock Blonde was about sex, obsession and yearning for the unobtainable. There were some fantastic performances from The Norwich Players as the audience were taken to the Mediterranean and to Hollywood in a play that drew parallels between the fantasy world of film and the real world of vulnerable young women and the men who exert power and influence over them.
Posted by Andy Yourglivch at 12:07