Chicharito you and I know you'll be scoring goals! 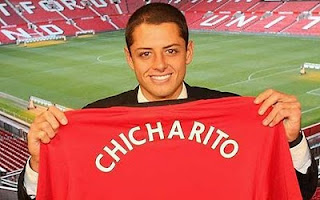 Chicharito you and I know you'll be scoring goals in front of the Stretford End and running past Premier League defenders with ease!

Let's hope Sir Alex goes for it in style with Wayne Rooney and new Mexican signing Javier Hernandez up front next season especially at Old Trafford. I think all United fans are getting excited about Chicharito. He is two footed and very quick. He is going to be like a breath of fresh air!

Chicharito means little pea in reference to his father Javier Hernandez Gutierrez a former player who was nicknamed Chicharo meaning pea because of his green eyes. I don't expect anything little from him next season. Chicharito is going to make a big splash in the Premier League pond!
Posted by Andy Yourglivch at 06:11