Come on United make it 19 times! 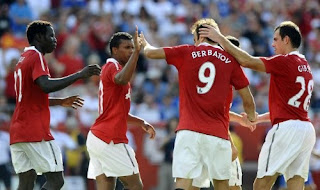 Come on United make it 19 times! We can finally shut everyone up at Anfield by winning the League and going one better then Liverpool. I have no doubts that we are capable of doing it. We will face strong challenges but I ask everyone to keep believing.

Everyone knows that when Wayne Rooney puts on the red shirt of United he is transformed. Chicharito will bring a new dimension up front and a new lean mean Dimitar Berbatov can finally prove his worth to the team. Michael Owen can provide an important cameo roll and Federico Macheda will want to shine when he is given a chance.

Nani and Antonio Valencia now have the chance to have big season's at United. Ji-Sung Park will again prove to be a valuable member of the squad. I expect another big season from Darren Fletcher while Anderson and Michael Carrick will have points to prove. Sir Alex will play Paul Scholes and Ryan Giggs when needed. Both will have major influences during the season.

In Edwin van der Sar and Tomasz Kuszczak we have a couple of reliable goalkeepers. One of the big items of news during the Summer was that Nemanja Vidic was staying at United. Let's hope Rio Ferdinand returns to full fitness soon but with Jonny Evans, Wes Brown, John O'Shea and not forgetting new signing Chris Smalling there are plenty of options in the centre of defence. I expect Rafael to feature more this season but Gary Neville will still have a lot to say! Fabio will be raring to go while Patrice Evra will have another big impact on United's season.

We are United. Not arrogant, just better. I really believe 19 times will become a reality this season. Remember this word during the season. BELIEVE!
Posted by Andy Yourglivch at 09:40