Death and the Maiden at Norwich Theatre Royal 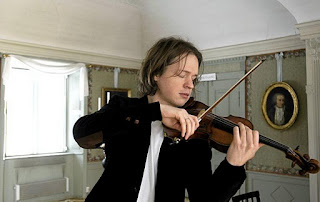 After my afternoon trip to Eaton I made my way to Norwich Theatre Royal on Sunday 2nd October 2011 for the Britten Sinfonia concert featuring Norwegian violinist Henning Kraggerud.

Mozart's fourth of his five concertos that he wrote in 1775 was thought to have been modelled on a work written 10 years earlier by Luigi Boccherini showing the same lightness of touch and elegant charm. This is typical early style Mozart that captures the grace of the eighteenth century court.

This was the World Premiere Tour of Piers Tattersall's Kreisler, l'entre deux guerres with Norwich being the first date. The piece is written informed by elements of the life and music of Fritz Kreisler, Violinist and composer of Austrian birth who became an American citizen in 1943.

Luciano Berio had a very uncategorised style. His Duets for two violins from 1979-1983 were written as 34 pieces for teaching his students and were named after renowned musicians and close friends. On Sunday five of these varied pieces were performed.

Franz Schubert composed Death and the Maiden for string quartet in 1824 while suffering from anaemia and a severe nervous disorder. The piece was arranged by Mahler for string orchestra in 1894 but was not published until 1984 by Mahler's daughter. The title is from the main theme of the second movement which originally appeared in a song by Schubert of the same name.

This was a truly brilliant performance from Henning Kraggerud and Britten Sinfonia from start to finish showing how classical music can be played in the 21st Century with a forward looking philosophy but always showing respect for the past. There was never a dull moment as we were thrilled with exciting music both old and new.
Posted by Andy Yourglivch at 13:25