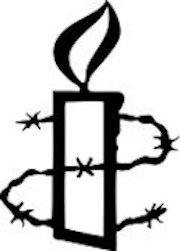 On Saturday 22nd October 2011 I attended the A Candle, Songs of Freedom concert at Norwich Assembly House celebrating 50 years of Amnesty International. This event was a collaboration between Big Sky and Norwich Amnesty who invited Helen Chadwick, Sianed Jones, Karen Wimhurst and Katherine Zeserson to compose new pieces based on poems on the theme of freedom.

The first half of the programme was Songs of Freedom with songs composed by Helen Chadwick and Katherine Zeserson while after the interval the newly composed pieces were performed as A Candle. The cycle of 8 songs were Travel Tickets, Boris Vilde, Listen, For John Harris, Star, Bird and Autumn, Words, As The Heart Beats and The Poet's Voice.

Norwich community choir Big Sky were conducted by Sian Croose in a moving performance of this thought provoking music with this being the first of a series in which choirs and Amnesty groups from around the country will perform these new works. I don't want freedom gram by gram, grain by grain. I have to break this steel chain with my teeth! I don't want freedom as a drug, as a medicine, I want it as the sun, as the earth, as the heavens.
Posted by Andy Yourglivch at 11:18