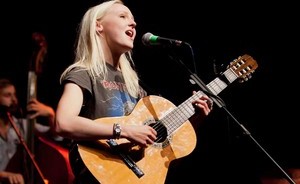 On Wednesday 19th October 2011 Laura Marling's When The Bell Tolls Tour arrived at Norwich Cathedral with support from The Leisure Society. Her former band Noah And The Whale were playing at Norwich UEA on the same night but I choose to be at the Cathedral along with a sell out audience at this nine hundred year old building.

The Leisure Society warmed us up with a great show full of folk pop led by Nick Hemming. They maybe murky water but it was definately holy water at Norwich Cathedral as we experienced a night of folk heaven. This is what you would expect from of a tour of Britain's oldest, sometimes eeriest and most beautiful buildings which definately include this amazing Cathedral in the Fine City.

Laura Marling put on a magical show of her timeless folk with her set concentrating mostly on material from her new album A Creature I Don't Know but with also tracks from her first two albums including splendid performaces of Rambling Man and Goodbye England. The night would have been perfect if snow had started falling during the set.

We were treated to a new song, Laura Marling playing solo and numerous facts about Norwich Cathedral from her band. A night to remember from a truly talentered artist who with her latest album has shown how far she has progressed since her debut album Alas I Cannot Swim.
Posted by Andy Yourglivch at 12:07