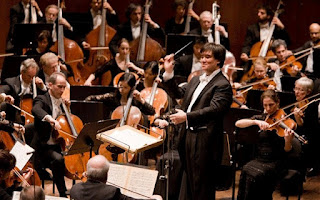 After the interval there was a dramatic performance of Prokofiev's Symphony No.5 from Alan Gilbert and the New York Philharmonic which was full of live. A symphony of the grandeur of the human spirit as Prokofiev would say. This piece was composed in 1944 and was greatly enjoyed by the large audience. There was an encore of Bernstein's Candide overture which was a splendid finish to the evening as New York made it's mark on the City of London.
Posted by Andy Yourglivch at 09:17