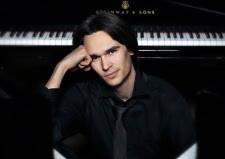 The programme for the evening was Oberon Overture - Weber, Piano Concerto No.1 in D minor - Brahms and Symphony No.3 in A minor - Rachmaninov.

It was cold outside the venue and during the concert snow started to fall but inside we were all filled with the warmth of the music. The concert began with Weber's Oberon Overture which is based on the story of Sir Huon, who undertakes a perilous rescue mission, protected by a magic horn which can summon the elf-king, Oberon.

Soloist for Brahms Piano Concerto No,1 was Estonian Mihkel Poll who gave an intense performance that delighted the audience. This piece started as a sonata for two pianos in 1854, it turned into a symphony the following year before Brahms combined piano and orchestra in a concerto in 1856.

After the interval we were treated to a wonderful performance from the Orchestra of Rachmaninov's Symphony No.3. This piece was written during the final phase of the composers career and has a contemporary style that was met with a lukewarm reception in 1936. Despite this the composer remained convinced that it was one of his best works.
Posted by Andy Yourglivch at 11:00