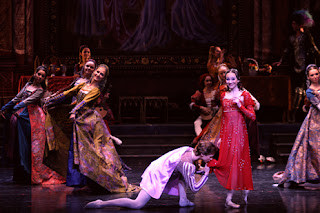 This was a powerful performance from the Moscow City Ballet full of beauty with Liliya Orekhova as Juliet being the star of the night. Everyone in attendance at Norwich Theatre Royal must have been enchanted by her and thrilled by Sergei Prokofiev's magical ballet. The music from the Moscow City Ballet Orchestra was splendid and uplifting and truly made this a night to remember.
Posted by Andy Yourglivch at 12:08