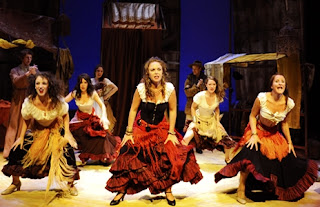 On the evening of Friday 22nd June 2012 I attended the Impact Opera performance of Georges Bizet's Carmen at Norwich Theatre Royal. The aim of Impact Opera is to give new and instantly appealing takes on classic works of music drama. They perform fully staged productions with an onstage chamber orchestra, making live opera more accessible, appealing and affordable to an ever-widening audience. Amie Clapson starred in the role of Carmen while Don Jose was played by Daniel Hoadley.

In a square outside of a cigarette factory in Seville, Spain, Morales, an officer of the Dragoons, is with his guards on watch. Micaëla, a maiden, arrives looking for her fiancé Don José, but is being bothered by the flirting soldiers, so she flees the square. Don José arrives with his captain, Zuniga to relieve the guard. At noon, the cigarette-girls come out of the factory to the square and Carmen appears. All of the men ask her for her love. She sees José, who at first does not notice her. She throws a flower at the feet of José, choosing him as a lover, and then flees. He is flattered by Carmen’s gesture, but is interrupted from his daydream by Micaëla, who brings a note from his mother reminding him to be faithful. As soon as Micaëla leaves, there is commotion from the factory. Carmen has attacked another woman. Zuniga orders José to arrest her. He goes to arrest her, but she seduces him to let her escape. He does, and is arrested.

A month later, Carmen and her friends are dancing and drinking at an inn that is a local hangout for smugglers. Zuniga and some of his men are there, and Zuniga attempts to woo Carmen. She refuses. She has promised to meet José there. The great bullfighter, Escamillo, enters the bar and falls in-love with Carmen. Two smugglers, Remendado and Dancaïro, enter the bar to tell Carmen and her gypsy friends, Frasquita and Mercedes, that their help is needed for a smuggling operation. Carmen refuses to go, since she is waiting on José. Having been released from jail, José arrives and the bar empties off all but he and Carmen. She entertains him with a private dance, which is interrupted by the call of bugles. José’s troops have been called to retreat. He is about to leave, which angers Carmen. He reveals the flower that she gave him when they met that he has kept with him in jail this entire time. He pledges his love to her. Zuniga bursts back into the inn and orders José to leave at once. José refuses the order and they both draw swords. They are both disarmed and Zuniga is taken away at gunpoint. José is forced to join the smugglers after openly defying a superior officer.

The band of smugglers is on the outskirts of town with Don José. He is disinterested in the smugglers and their intentions. Carmen, has tired of José, and she loves him no more. Carmen, along with Frasquita and Mercedes are reading tarot cards. Though Frasquita and Mercedes’ cards show wealth and happiness, Carmen pulls the death card. The smugglers depart, leaving José to guard over the camp. Micaëla approaches. As she comes near, José, who does not see her, he fires a shot in her direction, which is intended for Escamillo, who he has seen. Escamillo arrives and introduces himself as Carmen’s lover. They duel with knives. Carmen steps in and saves Escamillo’s life. They are to leave together, to spite José. Micaëla has come to find José and tell him to return home to his dying mother. He has to leave to go home, but before leaving, warns Carmen that he will be back.

A parade is entering the bull-fighting arena through a square in Seville. At the tail of the parade is Escamillo who is joined by Carmen. The other smugglers tell her that she needs to go away because Don José has come to kill her. She does not listen. José pleads with her that he is still in love with her. He offers to rejoin the smugglers. She will have nothing of it, laughing at him, and throwing the ring that he gave her at his feet. She tells José that Escamillo is hers, and that she will live with him until death. The crowd roars in the arena for Escamillo. As Carmen goes to join him, the jealous José grabs her from behind and stabs her in the heart. At the moment of Escamillo’s victory inside of the arena, Carmen dies.

This was a wonderful evening as the Impact Opera put on a splendid performance of Georges Bizet's brilliant Opera. A Spanish story of love, treachery, passion and betrayal. This version was sung in English and Spanish as the world's most famous opera was brought to life at Norwich Theatre Royal.
Posted by Andy Yourglivch at 11:34