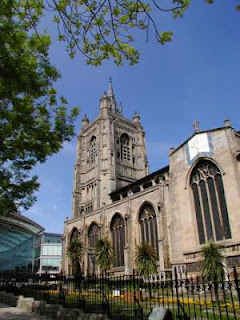 The programme consisted of Praeludium in G No.11 - Tunder, Ten Children's Songs (Settings of poems by Christina Rossetti) - Finzi, Christ lag in Todesbanden BWV 625 - Bach and The Sprig of Thyme - Rutter.

The lily has a smooth stalk, will never hurt your hand. But the rose upon her briar is lady of the land. This was a wonderful Summer Recital at St. Peter Mancroft Church which featured a splendid settings of poems by Christina Rossetti by Gerald Finzi.

The programme finished with John Rutter's The Sprig of Thyme which is a cycle of folk song settings. This was a splendid end to the Recital as these beautiful songs filled this historic Norwich City Centre Church. O the Cuckoo she's a pretty bird, she singeth as she flies. She bringeth good tidings, she telleth no lies. She sucketh white flowers, for to keep her voice clear. And the more she singeth cuckoo, the summer draweth near.
Posted by Andy Yourglivch at 23:54