Time of My Life at the Maddermarket Theatre 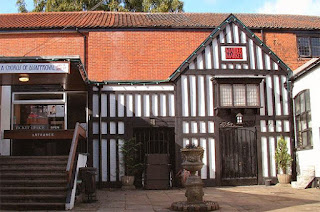 On the afternoon of Saturday 2nd June 2012 I attended the matinee performance of Time of My Life by Alan Ayckbourn at the Maddermarket Theatre, Norwich. The Norwich Players took us to the evening of 18th January 1992. David Newham and Susan Seddon starred in this dark comedy.

It is one of Ayckbourn's time plays beginning at Laura Stratton's 54th birthday party in the present at the Essa da Calvi restaurant and continuing in three time streams - the present with Gerry and Laura Stratton, the past showing how Adam, the younger son and his girlfriend Maureen's relationship began and developed, and the future showing the breakdown of Glynn, the elder son and his wife Stephanie's marriage.

This was an interesting play which as it progresses you learn about the individual characters and their relationships. There were lots of funny moments especially from the Restaurant Owner and four waiters who were all played by the same actor. During the performance it was clear which characters you should like or dislike. Time of My Life is a play in which seriousness and comedy can coexist. At the end of the performance Trevor Burton who played the staff of the Essa da Calvi restaurant got the audience to their feet to sing God Save The Queen for the Diamond Jubilee.

Posted by Andy Yourglivch at 14:54