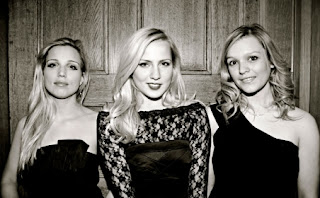 On Friday 25th May 2012 I attended the La Mer Trio lunchtime concert at Norwich Assembly House at the Norfolk and Norwich. This concert was part of the Royal Academy of Music Lunchtime Concert Series. The La Mer Trio are Renate Sokolovska - flute, Maja Wegrzynowska - viola and Hannah Stone - harp.

The programme consisted of Elegiac Trio - Bax, Le Tombeau de Couperin - Ravel, And Then I Knew 'Twas Wind - Takemitsu, Trio Sonata in D Op.2, No.8 - Leclair and Triptyque de la Lande - Oehler. This was the world premiere of Triptyque de la Lande with the composer Thomas Oehler in attendance at Norwich Assembly House.

This was a delightful concert at Norwich Assembly House as the La Mer Trio put on a brilliant performance in a packed music room as once again this year the Royal Academy of Music Lunchtime concert series proved to be one of the most popular features at the Norfolk and Norwich Festival. From the invisible motion of water in a stream from the piece by Toru Takemitsu to the landscape of Brittany which inspired the music composed by Thomas Oehler this was a concert full of imagination which was complemented by the distinctive playing from the La Mer Trio.
Posted by Andy Yourglivch at 11:07