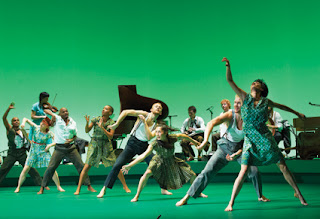 On Thursday 24th May 2012 I had another evening at the Norfolk and Norwich Festival. I attended the Fabulous Beast Dance Theatre performance of Rian at Norwich Theatre Royal. Rian is Irish for imprint or trance. Fabulous Beast came to the Festival after sell out runs at the Barbican and London Coliseum.

In Rian Michael Keegan-Dolan and Liam O'Maonlai embark on a journey to celebrate the tension and harmony between traditional music and contemporary dance. It was an evening at Norwich Theatre to celebrate Irish and World Music along with extraordinary dancing, making for an amazing experience mixing the traditional with influences from faraway places.

The cast of eight dancers and five musicians performed brilliantly as the audience were taken on a journey around the world by Liam O'Maonlai, founding member of Hothouse Flowers who's album Rian formed part of the live score with new material. The Fabulous Beast Dance Theatre Company from County Longford, Ireland shown why they are regarded as one of the most daring and highly original dance theatre companies in the world.
Posted by Andy Yourglivch at 12:21