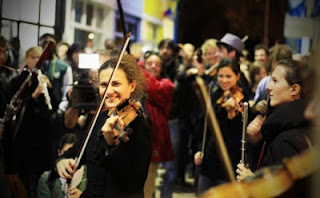 It was a beautiful sunny evening when I arrived at St. Andrew's Hall, Norwich on Wednesday 23rd May 2012 for the Spira mirabilis concert at the Norfolk and Norwich Festival. It was like they had brought the good weather from Italy with them. Spira mirabilis perform without a conductor and play one single piece of music to focus their energies.

At the Norfolk and Norwich Festival they performed Beethoven's lyrical Sixth Symphony Pastoral. Beethoven said that this piece was recollections of country life, more the expression of feelings than painting. It was completed in 1808 and starts with the awakening of cheerful feelings, taking us on a journey through the countryside. This was the perfect piece of music for the ensemble to bring their own unique blend of vivacity and virtuosity.

Spira mirabilis played with loads of energy and freedom with lots of spontaneity. It was like being at a chamber music concert as we were all thrilled by their wonderful performance which gave a feeling of immediacy. It was clear that the players were enjoying themselves and this made for an amazing atmosphere at St. Andrew's Hall. Spira mirabilis is named after a geometrical figure with the characteristic of always being superimposable onto itself.
Posted by Andy Yourglivch at 12:07