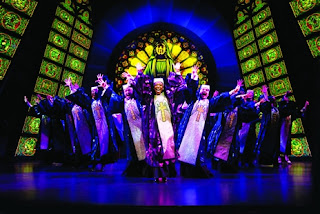 When disco diva Deloris Van Cartier witnesses a murder, she is put in protective custody in the one place the cops are sure she won’t be found – a convent! Disguised as a nun she makes the wrong impression on the convent’s strict Mother Superior. But when she transforms the convent’s choir into the most glorious new musical act in town, Deloris forms a lasting bond with her new found friends and the gang that’s chasing her finds itself up against an unstoppable team of soulful sisters!

This was a wonderful evening at Norwich Theatre Royal full of singing and dancing. It was a night to spread the love around as the cast filled the venue with soul music and put smiles on the faces of the audience. Take me to heaven (heaven)! Take me to ecstasy (ecstasy!) I'll give you all I've got, 'cause nothin's as hot as when you groove with me!
Posted by Andy Yourglivch at 11:32