Opera in the forest 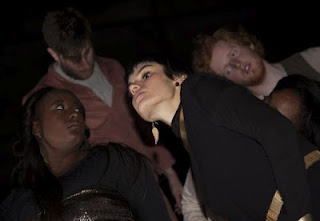 I walked down to Norwich Assembly House on the evening of Monday 21st May 2012 for the pre-performance talk with Frederic Wake-Walker the Artistic Director of The Opera Group in conversation with Patrick Dickie. This gave me a great insight to the night's performance of Bow Down at the Norfolk and Norwich Festival which was being performed in association with London Sinfonietta.

The Artistic Director told us of how they came to perform this opera and the history behind how it was written during a six month strike during 1977. Due to a lack of technical and stage staff Tony Harrison and Harrison Birtwistle had to make the piece incredibly simple to stage, using very sparse resources. There was a freedom in the Opera Group's staging of the piece meaning that every performance will vary with actors bringing their own personalities into play as they switch roles.

At 8.30pm I got on the coach outside Theatre Royal for the journey to the secret woodland location with great excitement as I looked forward to the performance. When we arrived at the site there was a short walk through the woods with flames lighting the way. This was an amazing setting for the Opera Group to perform this classic folk tale. Bow Down is the story of two sisters in love with the same man and torn apart by jealousy. The dark sister drowns the fair sister to take her lover. The murdered sister’s body is discovered and her bones and hair are used to build a harp which is played at her sister’s wedding. The harp denounces the murderess, who is put to death.

It was brilliant how the rhythms in the spoken text worked with the rhythms of the percussion instruments. This along with the beautiful sounds of the flute and oboe made for an amazing experience among the trees late at night. This has to be my personal highlight of this year's Norfolk and Norwich Festival. It was an unique occasion as The Opera Group took us into a mythological world. The opera in the forest was a cool and though provoking night. There were two sisters in a bower, their father was a baron of power.
Posted by Andy Yourglivch at 12:57