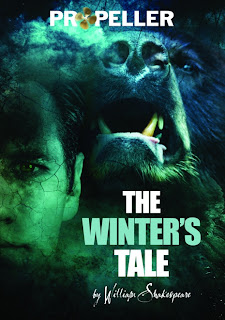 On Saturday 12th May 2012 I attended both Propeller's William Shakespeare productions at Norwich Theatre Royal starting with the matinee performance of The Winter's Tale, while in the evening I witnessed their performance of Henry V. Propeller is an all male Shakespeare company who mix a rigorous approach to the text with a modern physical aesthetic.

The Winter’s Tale is a tragic fairytale which tells the mysterious and extraordinary story of a man consumed by an inexplicable jealousy that destroys his family, his kingdom and himself. Wracked by guilt, Leontes sets off a chain reaction of events that leads to a miraculous climax and the chance of redemption. This is a re-visiting of Propeller’s highly acclaimed 2005 production.

This performance was full of wonderful acting including Robert Hands as Leontes and Tony Bell as Autolycus. We were given a band called The Bleatles and Beyonce's Single Ladies in a fun filled afternoon with the audience laughing out loud on many occasions.  This was a great afternoon spent at Norwich Theatre Royal and I still had Henry V to look forward to in the evening.
Posted by Andy Yourglivch at 12:42