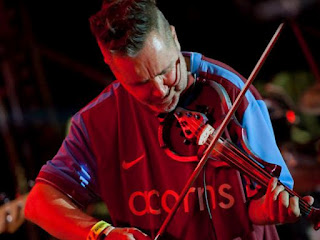 I was at Norwich Theatre Royal on the evening of Tuesday 22nd May 2012 for the Nigel Kennedy Quintet concert at the Norfolk and Norwich Festival. The venue was sold out as Nigel Kennedy and his acclaimed jazz quintet complete in Aston Villa shirts entertained us with an eclectic mix of Kennedy originals along with a selection of standards and covers.

The programme for the evening was Bach E Major, Fallen Forest, Bach A Minor 3rd and 4th, Father and Son, Where Paths Meet, Transfiguration or Saturn and Taste of Honey. With an encore including Danny Boy, Nigel Kennedy gave the Norfolk and Norwich Festival a night to remember.

This was a wonderful evening at Norwich Theatre Royal as Nigel Kennedy showed us all why he is regarded as one of the most gifted musicians this country has ever produced. Nigel Kennedy received three standing ovations at the end of the concert as the large audience shown their appreciation for the violinist.
Posted by Andy Yourglivch at 11:53