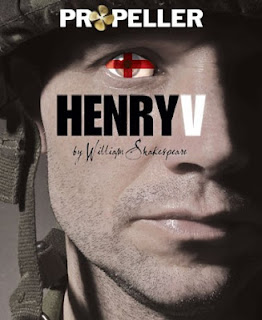 I was back in my seat at Norwich Theatre Royal on the evening of Saturday 12th May 2012 for Propeller's performance of William Shakespeare's Henry V. With Dugald Bruce-Lockhart as King Henry V and Nicholas Asbury as Montjoy this was another high quality production to thrill the Norwich audience.

Henry V is one of the greatest tales in English folklore about a British warrior. It is set in a time when nationalism is at its most dangerous and exciting. As increasing numbers of British servicemen and women are seeing active service, Propeller brings its own unique take on one of Shakespeare’s most famous plays. Thrilling and deeply moving, Henry V marks the beginning of a journey that takes us from the corridors of Westminster to the fields of France in an evening of unforgettable power.

From  performances of the Clash's London Calling and Manhattan Transfer’s Chanson d’Amour to the transformation of Henry V into the heroic warrior-king who won the battle of Agincourt Propeller brought us the magic of Shakespeare in a fun and different way. Saturday was a wonderful day as Propeller gave us a brilliant taste of two of Shakespeare's best known plays.
Posted by Andy Yourglivch at 22:59