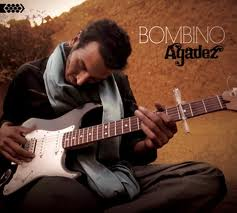 On the evening of Monday 14th May 2012 I was back at the Norfolk and Norwich Festival to attend the Bombino concert at Norwich Theatre Royal with support from Vusi Mahlasela. This was a night of World Music magic with music from the Sahara and South Africa.

Vusi Mahlasela is known as The Voice in his home country of South Africa who is celebrated for his distinct powerful voice and his poetic optimistic lyrics that connect Apartheid-scarred South Africa with its promise for a better future. He gave a wonderful performance of Say Africa as his African folk brought a warm and uplifting feeling to the Theatre Royal.

Bombino draws on his Saharan nomadic heritage to create music of rare power and eloquence. His electrifying jams capture the spirit of resistance and rebellion which reflect his upbringing during an era of armed struggle and violent suppression. This Tuareg guitarist and songwriter echoes the voices of Tinariwen and Ali Farka Toure. With his band Bombino made a loud noise that filled the venue with music from the Sahara which brought loud cheers and applause from the audience. At the end of each song Bombino said merci as we all appreciated seeing this amazing artist at the Norfolk and Norwich Festival. With loads more people discovering Bombino with the release of his latest album Agadez this year, this was the perfect time to witness his emotional and thought provoking music live.
Posted by Andy Yourglivch at 01:20