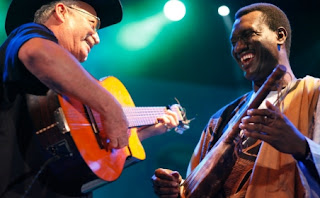 On the evening of Sunday 20th May 2012 I joined a large crowd at Norwich Theatre Royal to see Afrocubism as part of the Norfolk and Norwich Festival. This was a major world music event as musicians from the original Buena Vista Social Club were joined by additional talent from Mali and Cuba who took elements of Cuban and African music and turned them into exciting new sounds.

There was a great atmosphere at Norwich Theatre Royal as we were given a night celebrating Cuban and African music. Lead by Buena Vista Social Cub legend Eliades Ochoa along with a line-up including Toumani Diabate they took us on a magical journey which gave us a fusion of their music on songs like Al Vaivén De Mi Carreta.

Events like this show how great and relevant the Norfolk and Norwich Festival is when musicians as talented as those on stage at Norwich Theatre Royal can put on such a brilliant performance. Everyone in the audience were clearly enjoying themselves on a night that will be long remembered as the music of Cuba and Mali made their mark in the Fine City of Norwich.
Posted by Andy Yourglivch at 10:05