Dinosaurs at the Forum! 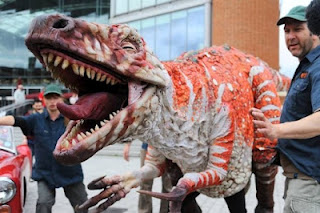 On the afternoon of Wednesday 16th May 2012 I attended the latest performance of the Dinosaur Petting Zoo from Australia's Erth Visual and Physical Inc at The Forum as part of the Norfolk and Norwich Festival. This was the first time in 65 million years that you could get up close and personal with a dinosaur in Norwich City Centre.

I wasn't scared at first when I saw the dragonfly but when the Australovenator dinosaur appeared my heart started to beat faster and I wondered if I was going to be his next meal. When I didn't put my hands up to protect my head I could have ended up as part of the Ausralovenator's family feast.

This show was brilliant for people of all ages as we were taken to the prehistoric world of Australian dinosaurs when Australia was part of the Antarctica Circle. Lots of fun was had by all and luckily no one was eaten during the performance.
Posted by Andy Yourglivch at 06:13