The Alchemist going for gold! 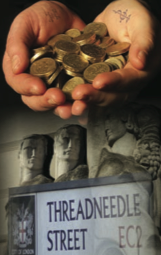 On the evening of Saturday 30th June 2012 I attended the Norwich Players performance of Ben Jonson's The Alchemist at the Maddermarket Theatre, Norwich. Ben Jonson had a liking for craziness, whereas Shakespeare had a horror for it. For Shakespeare, madness is frightening; for Jonson it's funny. In Shakespeare, there's nothing to live for if anarchy reigns, whereas for Jonson that's where life really had its foundations.

With his master Lovewit resting in the country to avoid an outbreak of plague in London, a clever servant named Face develops a scheme to make money and amuse himself. He gives Subtle, a charlatan, and a prostitute named Dol Common access to the house. Subtle disguises himself as an alchemist, with Face as his servant; Doll disguises herself as a zealous Puritan. Together, the three of them gull and cheat an assortment of foolish clients. These include Sir Epicure Mammon, a wealthy sensualist looking for the philosopher's stone; two greedy Puritans, Tribulation Wholesome and Ananias, who hope to counterfeit Dutch money; Drugger, a "tobacco man" hoping to marry the wealthy widow Dame Pliant; Dapper, an incredibly suave, fashionable, good-looking 17th century gentleman, and other minor figures looking for a short-cut to success in gambling or in business.

The play takes place over the course of one day in the house of Face's master. The three rogues are forced to increasingly frenetic manoeuvres first to manage all of their simultaneous scams, and then to fend off the suspicious Kestrel, Dame Pliant's brother. At last, Lovewit returns; quickly perceiving what Face has done in his absence, he devises a scheme of his own to allow all to end well. Doll and Subtle escape unpunished but empty-handed; Mammon's goods are restored to him, but the Puritans' are not. The smaller victims either flee or are driven from the stage. Lovewit himself pledges troth to Dame Pliant, with Kestrel's approval. Face is restored without punishment to his original place as Jeremy Lovewit's butler.'

This was a wonderful evening at the Maddermarket Theatre as the Norwich Players brought us the genius of Ben Jonson. The Alchemist is unflinching in its satire, very much a play for our own straitened times. It was a night for going for gold but knowing that not everything that glitters is gold.
Posted by Andy Yourglivch at 13:06