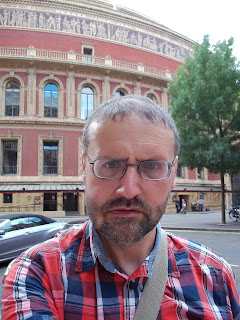 After my visit to the Victoria and Albert Museum in South Kensington I made my way to the Royal Albert Hall on Tuesday 17th July 2012 for the BBC Proms. This was for Prom 5 with the BBC Philharmonic Orchestra conducted by Juanjo Mena with soprano Anne Schwanewilms. I was exciting looked forward to the concert from my seat in the Circle front row.

The concert opened with two works from Richard Strauss. The first being his Nietzche inspired tone poem Also sprach Zarathustra which explores the relationship between nature and mankind. This was followed by Four Last Songs which was famously evoked by a monumental opening sunrise. This piece reflects the lyrical, nostalgic vein of the composer's final year.

This was the UK Premiere of Kaija Saariaho's Laterna magica (Magic Lantern) which is inspired by the autobiography of film director Ingmar Bergman, the piece explores the effect of motifs played at different speeds, as a musical parallel to the film world's moving images created from a rapid succession of stills.

The concert ended with Sibelius's final completed symphony which brought with it a radical continuous approach to form that challenged the very essence of the genre. Symphony No.7 first appeared in 1924 as Fantasia sinfonica but after the success of the first performance he was soon referring to it as the Seventh Symphony.