The Taming of the Shrew at Norwich Cathedral 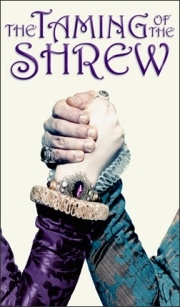 On the evening of Wednesday 11th July 2012 I attended the GB Theatre Company performance of William Shakespeare's The Taming of the Shrew at Norwich Cathedral as part of their Shakespeare Festival 2012. This was an open air theatre production in the cathedral cloister. Their were dark clouds and peregrine falcons flying overhead but no rain on the night.

A tinker, Christopher Sly passes out drunk and is thrown out of the local tavern. A local Lord takes him to his house and decides to play a practical joke on him. He and his household convince Sly that he is in fact the Lord of the house. They inform him that a group of players have arrived to perform The Taming of the Shrew for him. This then becomes not only the play presented to Sly but also the main play presented to the audience.

Hortensio who seeks his fortune, the rich and elderly Gremio and the romantic Lucentio all arrive at the house of Baptista to woo his beautiful daughter Bianca. However, Baptista insists that Bianca cannot be wed until his older daughter, the shrewish Katherine is married, but with her violent temper and reputation for shrewishness who will marry her?

Meanwhile Lucentio has gained the upper hand with Bianca. His servant Tranio convinces a travelling school teacher to pretend to be Lucentio’s father, Vincentio. Baptista wants to meet Vincentio to discuss details of the marriage. When the real Vincentio turns up there is great confusion, but eventually the match of Lucentio and Bianca is settled.

In the meantime, Hortensio has found a wealthy widow to wed. Petruchio and Katherine return to attend the wedding. Everyone is surprised at what appears to be a tamed Katherine. The men hold a wager to see whose wife is most attentive to their wishes and call for them, but only Katherine answers and she makes a speech in homage to her husband’s wishes whilst he watches on dotingly. The only question is: ‘Who has tamed whom?’

This was a wonderful evening at Norwich Cathedral as the GB Theatre Company put on a splendid show with amazing performances from Lucia McAnespie as Katherine and David Davies as Petruchio. This production was directed by Jenny Stephens who previously directed The Merry Wives of Windsor for them in 2010.
Posted by Andy Yourglivch at 12:56