The Tempest at Norwich Cathedral 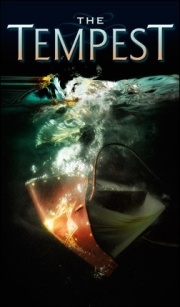 I was back at Norwich Cathedral on Thursday 12th July 2012 for the GB Theatre Company performance of William Shakespeare's The Tempest. Once again we were entertained by the peregrine falcons flying overhead on another exciting evening at the Cathedral's 2012 Shakespeare Festival.

Prospero, (who is both the Duke of Milan and a magician), was usurped by his brother Antonio 12 years ago, helped by Alonso the King of Naples, and the King’s brother Sebastian. Prospero was then put to sea with his baby daughter Miranda, after being given some aid by faithful Lord, Gonzalo, who remained in service to the new Duke, Antonio.

Prospero and Miranda land on a distant island and by the time the play begins, Prospero has been ruling it by using his magic art for the previous 12 years.

Already living on the island were Ariel, an aery spirit, trapped in a tree by dead witch Sycorax until Prospero rescued him, and the savage Caliban, son of Sycorax. He was a free servant until he tried to rape Miranda. Now he is Prospero’s slave and naturally he resents his bondage.

Prospero uses his magic and the help of Ariel to raise a storm, (the tempest), when he divines his enemies to passing by the island by ship as they return from the wedding of King Alonso’s daughter. King Alonso, his son Ferdinand, Antonio, Sebastian, Gonzalo, Stephano and Trinculo are all shipwrecked onto the island.

Alonso and Ferdinand are separated in the wreck and Alonso searches for his son who he fears is drowned. Encouraged by Antonio, Sebastian is urged to plot against his brother, King Alonso, to seize the crown.

A drunken butler Stephano and a jester Trinculo meet the half-man/half-beast Caliban who persuades them that they should kill Prospero and rule the island. Ferdinand is lured by Ariel’s music to meet Miranda and they fall instantly in love. Prospero tests Ferdinand by enslaving him to make sure that his feelings for his daughter Miranda are real and true. Eventually satisfied, he presents the young couple with a betrothal masque.

Drawing his enemies into his circle, Prospero finally confronts and forgives them. Having done this he can drown his books of magic, pardon Caliban, break his magical staff, set Ariel free and leave the island for Milan where he will resume his rule as Duke.

This production of The Tempest was directed by Jack Shepherd who became more widely known for his performance as Wycliffe in the nineties. This performance delighted with Daniel Dingsdale as Ariel and Sarah Middleton as Miranda. I enjoyed my two evenings at the 2012 Shakespeare Festival and I was very impressed with the shows that the GB Theatre Company put on, which gave great entertainment to those in attendance.
Posted by Andy Yourglivch at 13:42