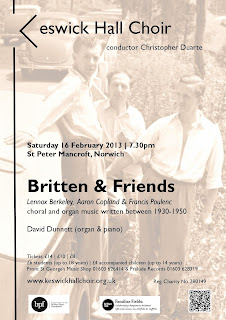 The Keswick Hall Choir received a well deserved and loud round of applause at the end of the concert to show how much everyone in attended at St. Peter Mancroft Church had enjoyed their performance. This was definitely a night to remember, with the songs and music of Benjamin Britten and his friends filling this historic Norwich City Centre venue with lots of joy.
Posted by Andy Yourglivch at 10:01