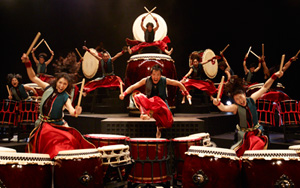 Taiko drumming is a physical, as well as musical spectacle where the drums can measure up to six feet across, requiring powerful stamina to play. The Yamato Drummers put on powerful performance at Norwich Theatre Royal which thrilled the large audience. There were moments of comedy as they interacted with the crowd who responded with great enthusiasm. It was definitely a loud evening as we enjoyed the expertise and athleticism of the nine performers as well as the amazing musical sounds they produced.
Posted by Andy Yourglivch at 09:03