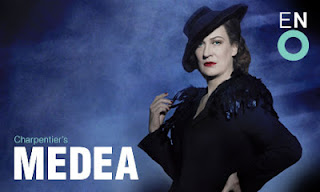 This was an amazing evening to be at the London Coliseum as Sarah Connolly put on a wonderful performance as Medea on a brilliant but scary night on St. Martin's Lane. The musical theatre choreography with prancing sailors and chorus girls made for some light relief and laughter during the Opera. I always enjoy my visits to the London Coliseum as it is very interesting to see how the ENO are going to rework the Opera's they perform. This was a great success for the ENO and made this a night to remember for me at the Opera in London.
Posted by Andy Yourglivch at 10:41