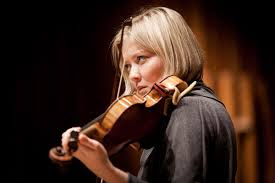 The programme consisted of Viderunt omnes (extract) - Perotin, Violin Concerto No.1 in A minor - Bach, AQUA - Esenvalds, Motet - Komm, Jesu, komm - Bach and Violin Concerto - Distant Light - Vasks. This was a concert that took us on a musical journey from the 12th Century composer Perotin through to Peteris Vasks' Distant Light, written in 1977.

The concert opened with Britten Sinfonia Voices performing Perotin's Viderunt omnes from Norwich Theatre Royal's Circle. All the ends of the earth have seen the salvation of our God. Rejoice in the Lord, all lands. Known as Perotin the Master, meaning he was licensed to teach.

Johann Sebastian Bach's Violin Concerto in A minor is similar in style to Vivaldi.  It is unknown exactly when the work was composed, but copies dated 1730 suggest it may have been composed later than the other two concertos for violin, perhaps during Bach's time as director of the Collegium Musicum in Leipzig.

Eriks Esenvalds' AQUA is a new commission which brought together the Britten Sinfonia Voices with the orchestra's string section in a work that the composer says is inspired by nature and time. Latvian Eriks Esenvalds is known for his distinctive vocal techniques, often asking singers to create unusual atmospheric effects by whistling or breathing in a particular way.

Komm, Jesu, komm is a motet by Johann Sebastian Bach, with a text by Paul Thymich. It was composed in Leipzig before 1735, possibly between 1723 and 1734, and had already received its first performance by 1731–1732. The motet was written for a funeral and is a solemn work that focuses on a personal, heartfelt plea to Jesus at the point of salvation. I am the way, the truth and the life. No man cometh unto the Father but by me.

Peteris Vasks trained as a violinist and double bassist at the Latvian Academy of Music and played with a number of orchestras before returning to the Academy to study composition. His Violin Concerto Distant Lights from 1977 is a work of extreme musical complexity. Vasks says that the concerto represents the possibility of a more ideal world.

From Perotin to Bach unto the Latvian music from Esenvalds and Vasks this was a night of musical delights from Britten Sinfonia at Norwich Theatre Royal. The diverse programme made for an interesting and enjoyable evening. Alina Ibragimova was brilliant throughout the concert while the Britten Sinfonia Voices were in fine voice. The highlight of the night was Peteris Vasks' Violin Concerto Distant Light which is a remarkable and inspiring piece of music.
Posted by Andy Yourglivch at 08:23