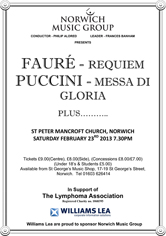 On the evening of Saturday 23rd February 2013 I attended the Norwich Music Group concert at St. Peter Mancroft Church, Norwich in support of The Lymphoma Association. The Norwich Music Group is the brainchild of Julian Musgrave, Philip Aldred and Frances Banham and was formed with the express purpose of performing the great choral works in Norwich's fine Churches using the best Singers and Instrumentalists.

Philip Aldred conduced the Norwich Music Group with a programme that consisted of Messa Di Gloria - Puccini, Gaelic Blessing - Rutter, The Lord Bless You And Keep You - Rutter, Cantique de Jean Racine - Faure and Requiem - Faure. This was a wonderful selection of music to fill St. Peter Mancroft Church and make this a night to remember.

Daniel Bartlette - Tenor and Fearghus Cooper - Bass featured on Puccini's Messa Di Gloria while June Harrison - Soprano and Fearghus Cooper performed Faure's Requiem. This was a concert of wonderful choral music composed by Giacomo Puccini, John Rutter and Gabriel Faure.  Puccini's Messa Di Gloria composed in 1880 which is distinguished by the beauty of its vocal writing and by a heart warming lyricism underscored by extremely inventive instrumentation opened the evening's music.

Gabriel Fauré composed his Requiem in D minor, Op. 48, between 1887 and 1890. The choral-orchestral setting of the Roman Catholic Mass for the Dead is the best known of his large works. This was a splendid piece of music to finish the evening. The concert was a great success with brilliant performances from the Orchestra and the Choir while at the same time supporting the Lymphoma Association.
Posted by Andy Yourglivch at 09:14