God of Carnage at The Maddermarket Theatre 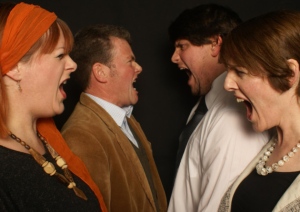 On Saturday 2nd March 2013 I made my way to The Maddermarket Theatre in Norwich with great anticipation to attend the matinee performance from The Norwich Players of God of Carnage by Yasmina Reza. God of Carnage had its London Premiere in 2008 where it scooped an Olivier for best new play.


Benjamin and Henry get involved in an argument because Henry refuses to let Benjamin join his gang resulting in Benjamin knocking out two of Henry’s teeth with a stick. The dispute in the park brings two sets of parents together to discuss the incident in a reasonable way. The evening starts in a civilised manner but soon degenerates into irrational and childish arguments.
The play ran for approximately eighty five minutes in one act and we were warned that several swear words would be used in the dialogue. This was not surprising as the conversations soon turned into heated arguments. This was a fast paced and funny play which made for a very enjoyable afternoon spent at The Maddermarket Theatre.
Posted by Andy Yourglivch at 13:58