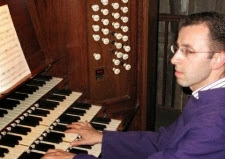 Oliver Waterer played a wonderful programme of organ music at Norwich Cathedral to the delight of the lunchtime audience. He has recently moved from Chelmsford Cathedral to Pembrokeshire and therefore we were very pleased that he was still able to keep this performance in his diary. My favourite piece was the March from the Birds of Aristophanes.
Posted by Andy Yourglivch at 15:26