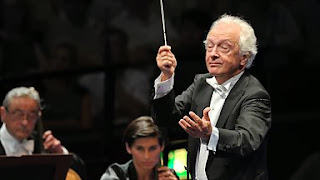 This was a wonderful evening at the Royal Albert Hall as the Warsaw Philharmonic Orchestra conducted by Antoni Wit gave us a brilliant performance of some very emotional pieces of music from Eastern Europe. There were some very dark sounds which set the mood for the performance. This was the perfect way for Antoni Wit to finish his twelve years as the Orchestra's Artistic Director.
Posted by Andy Yourglivch at 02:51