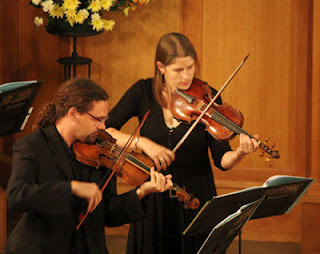 Norwich Cathedral was a splendid setting for this wonderful programme of music by Bach, Boyce and their contemporaries.The highlights were William Boyce's Symphony No.1 and Bach's Lutheran Mass in G Minor. Boyce wrote eight symphonies which were first published in 1760. However they were all composed over the previous 21 years as either an ode to a vocal or stage work or as an overture.

Bach composed his Lutheran Mass in G Minor around 1738-39. It is made up of music from three different cantatas. The Kyrie is taken from Lord Thine eyes look after the faith. For the Gloria Bach selected All things should accord with the will of God and the following four movements were from All things are waiting for you.

This was another very enjoyable evening at Norwich Cathedral with the Norwich Catherdral Consort, Norwich Baroque and all the soloists putting on a brilliant performance. Glory to God in the highest and on earth peace to men of good will.
Posted by Andy Yourglivch at 07:49