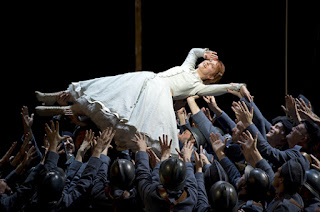 On Saturday 21st April 2012 I caught the early Norwich to London train. After a morning at Trafalgar Square and The National Gallery I made my way to Covent Garden to attend the Royal Opera's performance of La Fille du regiment at The Royal Opera House.

Maria was played by Patrizia Ciofi while Tonio was played by Colin Lee. La Fille du regiment was written by Gaetano Donizetti while the composer was living in Paris and was first performed in 1840. This is an Opera Comique in two acts with a french libretto.

On their way to Austria, the terrified Marquise of Berkenfeld and her butler, Hortensius, have paused in their journey because a skirmish has broken out. When the Marquise hears from the villagers that the French troops have retreated, she comments on the rude manners of the French people. Sulpice, sergeant of the 21st regiment, assures everyone that his men will restore peace and order. He is joined by Marie, the daughter of the regiment, which adopted her as an orphaned child. When Sulpice questions her about a young man she has been seen with, she explains that he is Tonio, a local Tyrolean who once saved her life.

Troops of the 21st arrive with a prisoner: this same Tonio, who says he has been looking for Marie. She steps in to save him, and while he toasts his new friends, Marie sings the regimental song. Tonio is ordered to follow the soldiers, but he escapes and returns to declare his love to Marie. Sulpice surprises them, and Marie must admit to Tonio that she can marry only a soldier of the 21st.

The Marquise asks Sulpice for an escort to her castle. When he hears the name Berkenfeld, Sulpice remembers a letter he found near the young Marie on the battlefield. The Marquise soon admits that she knew the girl's father and says that Marie is the long lost daughter of her sister. The child had been left in the care of the Marquise, but was lost. Shocked by the girl's rough manners, the Marquise is determined to take her niece to her castle and give her a proper education. Tonio has enlisted so that he can marry her. But Marie has to leave both her regiment and the man she loves.

The Marquise has arranged a marriage between Marie and the Duke of Krakenthorp. Sulpice is also at the castle, recovering from an injury, and is supposed to be helping the Marquise with her plans. The Marquise gives Marie a singing lesson, accompanying her at the piano. Encouraged by Sulpice, Marie slips in phrases of the regimental song, and the Marquise loses her temper. Marie thinks about the meaninglessness of money and position when she hears soldiers marching in the distance and is delighted when the whole regiment files into the hall. She leads them in singing a patriotic tribute Salut a la France. Tonio, Marie, and Sulpice are reunited with Tonio asking for Marie's hand. The Marquise is unmoved by the young man's declaration that Marie is his whole life. She declares her niece engaged to another man and dismisses Tonio. Alone with Sulpice, the Marquise confesses the truth, Marie is her own illegitimate daughter.

Hortensius announces the arrival of the wedding party, headed by the groom's mother, the Duchess of Krakenthorp. Marie refuses to leave her room, but when Sulpice tells her that the Marquise is her mother, the surprised girl declares that she cannot go against her mother's wishes and agrees to marry a man that she does not love. As she is about to sign the marriage contract, the soldiers of the 21st, led by Tonio, storm in to rescue their daughter. The guests are horrified to learn that Marie was a canteen girl, but they change their opinion when she tells them that she can never repay the debt she owes the soldiers. The Marquise is so moved by her daughter's goodness of heart that she gives her permission to marry Tonio. Everyone joins in a final Salut a la France.

The Royal Opera House was full of tears and laughter complete with wonderful singing and music as we were treated to a brilliant performance of La Fille du regiment which is always a fun Opera to attend. Bravo to the Royal Opera for such a splendid afternoon at Covent Garden.
Posted by Andy Yourglivch at 13:07