Falling down the rabbit hole at The Royal Opera House 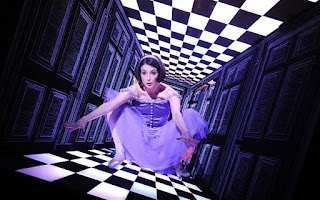 On Monday 26th March 2012 I made the trip to London to attend The Royal Ballet's performance of Alice's Adventures in Wonderland at The Royal Opera House. It's always wonderful to be at this historic venue especially on nights like this.

Alice's Adventure's in Wonderland is a ballet in three acts instead of two after slight amendments from its premiere last year. Choreography by Christopher Wheeldon and music by Joby Talbot. On my visit to The Royal Opera House Lauren Cuthbertson played Alice with Federico Bonelli as Jack/The Knave of Hearts.

The Victorian childhood of Lewis Carroll’s Alice and her encounters with extraordinary people, strange creatures and unusual events gave The Royal Ballet an entire new world to create which they did brilliantly. We all loved Edward Watson as The White Rabbit and I particularly loved the Cheshire Cat. We were all scared by Laura Morera as The Queen of Hearts  hoping that we all still had our heads at the end of the evening. This is a ballet for the 21st Century, full of magic that takes you to the world of Alice falling down the rabbit hole in Lewis Carroll's classic novel.
Posted by Andy Yourglivch at 11:08