The Barber of Seville at Norwich Theatre Royal 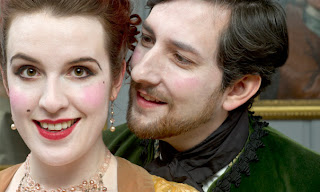 On the evening of Tuesday 10th April 2012 I attended the English Touring Opera performance of The Barber of Seville at Norwich Theatre Royal. With music by Giacchino Rossini and libretto by Cesare Sterbini this opera was first performed in 1816 at the Teatro Argentina in Rome. It is based on the comedy Le Barbier de Seville by Piere de Beaumarchais.

With english translation by David Parry this English Touring Opera's new production was first performed at Hackney Empire in March 2012. Each year the company on average gives 110 performances at 55 venues across the country.

Count Almaviva is in love with Rosina, the rich ward of Dr. Bartolo, an old doctor, who plans to marry her himself. The Count serenades Rosina with the help of a group of actors and musicians. He enlists the help of Figaro, a barber, who prides himself on his ability to manage the affairs of the city.

The Count makes himself known to Rosina as a poor student called Lindoro and Figaro suggests that in order to gain admittance to the house he should pretend to be a drunken soldier billeted on Dr. Bartolo. Rosina falls in love with her unknown admirer but Dr. Bartolo has heard rumours about Almaviva's interest in her and decides to marry her immediately.

Rosina is delighted when the Count reveals that he is really her admirer. The Doctor's annoyance at Almaviva's behaviour causes such a row that the militia are called by the neighbours. Later the same day the Count assumes yet another disguise and enters the house as Don Alonso, a music teacher. The Count tells Rosina that he will elope with her at midnight.

Dr. Bartolo confronts Rosina with a letter she addressed to Lindoro and catches her by surprise when he makes out that Lindoro is the agent of Count Almaviva, who only wants to marry her for her money. She agrees to marry Bartolo at once and tells him of the planned elopement.

Rosina repulses Lindoro until she learns that he is himself Count Almaviva and falls into his arms. Basilio arrives with a notary to marry Rosina to her guardian but a bribe easily persuades him to witness the marriage of Rosina to the Count instead. Bartolo and the magistrate appear too late and Bartolo is obliged to acknowledge that he has lost her.

This was a wonderful evening at Norwich Theatre Royal with the English Touring Opera and Orchestra taking us to the world of The Barber of Seville with a brilliant performance full of splendid singing and music.
Posted by Andy Yourglivch at 15:28