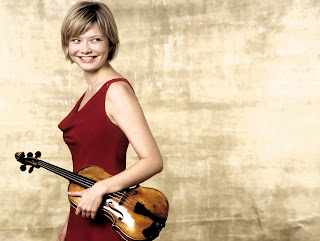 I made my way to the John Innes Centre at Colney, Norwich for the Norfolk and Norwich Chamber Music concert on the afternoon of Sunday 21st October 2012 with Alina Ibragimova who entertained us with a solo violin performance of Johann Sebastian Bach Sonatas and Partitas. The programme consisted of Bach's Sonata No.1 in G minor BWV1001, Partita No.1 in B minor BWV1002, Sonata No.2 in A minor BWV1003 and Partita No.2 in D minor BWV1004.

Alina Ibragimova was born in Russia and entered the Gmessin State Musical College in Moscow at the age of five. She moved to London in 1996 when her father took up a post with the LSO. Alina went to the Yehudi Menuhin School and then attended the Guildhall and Royal College of Music studying with Christian Tetzlaff. She know has a full international career performing music from baroque to new commissions. In 2010 she won the Royal Philharmonic Society Young Artist Award.

Bach write his Sonatas and Partitas in 1720 of which there are three of each. They occupy an unchallenged position in the literature for solo violin. Alina Ibragimova put on a brilliant performance at a packed John Innes Centre on her 1775 Anselmo Bellosio violin. She proved what a talented Violinist she is and made this an afternoon to remember.
Posted by Andy Yourglivch at 20:52