The Marriage of Figaro at Norwich Theatre Royal 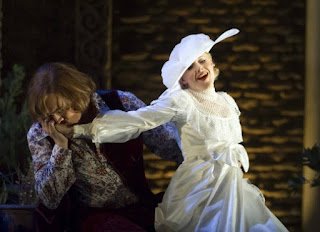 On Tuesday 30th October 2012 I attended the Glyndebourne performance of Le nozze di Figaro (The Marriage of Figaro) at Norwich Theatre Royal. This was a great opportunity to witness world class Opera in the Fine City.

The entire action of Mozart’s life-enhancing opera takes place within a single day; a day of madness as the subtitle of the original text describes it. Figaro and Susanna’s determination to marry enrages their master, the Count, reducing him to a state of lustful frustration, disregarding his wife, the Countess, who is left to suffer the miseries of unrequited love. In a breathless circle of plots and counter-plots, the Count pursues Susanna, the young and hormonally volcanic Cherubino pursues anything in a skirt and the scheming pair of Bartolo and Marcellina come close to upsetting Figaro’s plans but are caught in a web of their own devising.

Conceived by the brilliantly scurrilous writer Beaumarchais in 1784 as a barbed satire on the aristocracy, the original play was repeatedly banned from performance in the years leading up to the French Revolution. It was considered to be dangerously incendiary and to Mozart and his librettist Da Ponte it proved irresistible, inspiring them to create an opera of unrivalled beauty and acutely perceptive characterisation.

Transferring direct from the 2012 Festival,this was a new production from celebrated director Michael Grandage, returning to Glyndebourne following his critically acclaimed Billy Budd (2010). A packed Norwich Theatre Royal had a splendid entertaining evening as Glyndebourne thrilled us and gave us lots of laughs. This was Mozart set in the Swinging Sixties with Joélle Harvey as Susanna and Guido Loconsolo as Figaro both performing brilliantly along with the fine music from the orchestra conducted by Jonathan Cohen. Glyndebourne took us on an amazing emotional journey.
Posted by Andy Yourglivch at 10:04